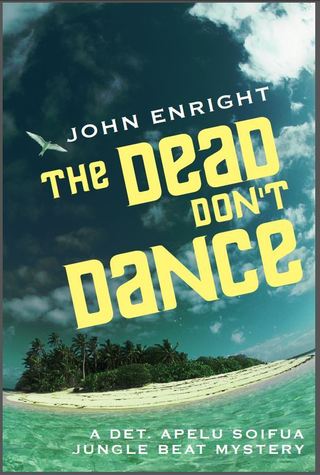 The siva ma pese show that followed was good, very good. In this small village out on the very oldest edge of the culture, there was still a purity of identity in the dances and songs. These were not performances. These were not performers, no matter how perfectly rehearsed they seemed. These were expressions of something so shared it seemed seamless. The dancers were just the kinetic enactment of the audience’s will. The songs were sung in a harmonic voice that sang for everyone within hearing. The words were as well-worn and familiar as the sound of the surf on the broken coral beach.
Apelu watched Bobbie becoming cocooned within the weaving sounds and movements, a painless possession. If the singers and dancers were performing for anyone, they were performing for her, the one outsider there, the one whom they wished to enthrall into joining them. It was working.
The next to last song was sung by a group of the eldest villagers, who took their time finding their places to sit cross-legged facing the audience. Time was on their side as they settled in and made their flower ulas comfortable around their shoulders. The old men started slapping their bare knees, old bones shifting to find the place of least pain. The rhythm established itself, skin on skin, slow. The oldest woman in the group, eyes closed behind a web of wrinkles, called out the first refrain in a high nasal falsetto. The line was repeated by those behind her, who were now nodding in unison with the beat. The leader again led the call and response, voices louder, the beat a little faster. The next line they all sang together in old half-tone harmony, and Apelu felt the hair on the back of his neck, the hair on his forearms and calves, even his pubic hair rise up. They were singing a war song that had not been sung for years, an `o le pese a le taua. It was the story of a war fought long ago between Olosega and Ofu. The old woman knew all the words and—her obsidian-irised eyes now open and drilling the crowd—she led the chorus through the gruesome details of Olosega’s victory. As a woman her role was to incite the young men to take as many heads as they could and bring them back to her. She did it well. As the song went on, others inside and outside the hall were caught up in the ancient inherent rhythm. A primal moment washed down off the moonlit mountain behind them and out to the sea. The old lady’s cracked voice of victory and revenge held them all together as within a net. Bobbie, not knowing what was transpiring, was transfixed. The old woman’s eyes held her. Her ancient voice rose, pleading for more blood. Bobbie didn’t understand a word of it. She didn’t have to.
The final dance was the money-maker, the tauluga, where the high chief’s most eligible daughter did a solo siva as the virginal personification of the village’s continuing image of its essential purity. One by one, then in droves, members of the audience rose from the floor and approached, bowed, and threw dollar bills at the dancer’s feet or slapped them on to the coconut oil glistening skin of her bare shoulders and arms. The dancer’s expression never changed—a Mona Lisa smile focused on some distant middle vision. The Ofu pulenu`u and his nephews threw lots of money at her, too much really. There was something unseemly about their excess. Bobbie got up to lay money at the dancer’s feet; then she joined the other women now standing who swayed in their own supporting siva in a wide circle around the dancer. Bobbie did well. She was limping but she wasn’t blushing.