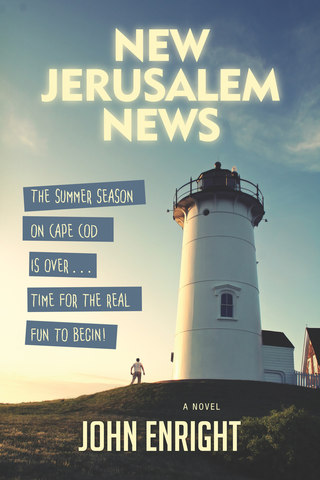 Dominick is always just passing through. He is a professional houseguest who follows the sun and the leisure class from resort to resort. But this winter he lingers on a quaint New England island and in spite of his best intentions becomes involved in the travails of his eccentric geriatric hosts. An environmental protest against a proposed liquid natural gas terminal turns ugly, and by accident and happenstance Dominick becomes a mistaken suspect in terroristic bombings.

But the book, of course, is really about its characters, and the plot is just to keep them busy as we get to know them. None of them are young—white-bearded men and blue-coiffed women—dealing with aging, dementia, and ungrateful children. Dominick strives to float above it all in a life of itinerant escape. A New England comedy of sorts, on another level the book is an extended meditation on history and identity.

It all started on a visit to one of those quaint little villages up the coast. They all ran together in Dominick’s mind—marinas filled with otiose unpeopled pleasure boats, heavy square buildings with plaques attached attesting to their longevity, fish and chips shops and pubs with cute names that sold clothing declaiming them, and tan flotillas of teenage girls showing the maximum amount of skin allowed by law. Brenda was off trolling the curio shoppes and boutiques. Charlie had found a stool and a drink in the dark cave of a bar lit solely by plasma TV screens playing the afternoon Red Sox game. Dominick plopped his considerable self down on a shaded bench in front of one of the ubiquitous realtor’s offices and lit a cigar.

Special to The Providence Journal

John Enright, who lives in Jamestown and has written several terrific mysteries about Samoa, has launched a new series.
Dominick is a professional houseguest who, like Enright’s style, is compassionately sardonic, witty, funny, quirky and delightful. He’s a corpulent, cigar-smoking, middle-aged, historically-minded, hashish-smoking wanderer who often experiences loneliness and “pointlessness,” which lends a certain melancholy and vulnerability to his character, but is so much fun to be with, he’s also irresistible.
In this first outing, which takes place on an island off the New England coast during the winter (splendid descriptions throughout) — New Jerusalem is where the ferry leaves from, and the novel’s title is its newspaper — Dominick gets involved with cranky, querulous, strong-minded geriatrics like Atticus and Lydia Jameson.
Atticus supports “Save Our Bay,” which opposes a natural gas terminal in Old Grofton. Lydia’s gradually sinking into dementia, painting in a freezing shed-studio behind their massive decaying mansion. Their daughter Angelica wants to sell the place, and Dominick poses as Lord Witherspoon, a possible buyer, to hold her off.
The Feds get involved, manufacturing a terrorist group linked to Atticus, raiding, interrogating, sending in black helicopters, and suspecting the non-existent foreigner Witherspoon. Lydia nails burnt toast to the wall. John Starks, the gay curator of the local historical society, takes Dominick in who also gets involved with “Queen” Emma, a local Indian, and Martha Arnold who’s trying to sell forged letters of her ancestor Benedict. The characters are terrific oddballs, wonderful to spend time with. Dominick insists that “Normalcy was such an assumption.”
What a great beginning to a new series. You’ll laugh out loud but also enjoy Dominick’s asides on class warfare, crows, the past and cold, wet, provincial New England and New Englanders. The plot leaps and twists and delights.
One favorite line — a bumper sticker: “If there is a tourist season, why can’t we shoot them?” Enright’s off and running with Dominick, and he’s terrific.

New Jerusalem News–catchy title, catchy cover. Both intrigued me. I’m so glad they did. Why? Because I met the quirkiest group of people living between the pages of this book and in a town called New Jerusalem on Cape Cod.
However, you might know I’d land in the middle of this at the end of summer season. Let it never be said the winters in New Jerusalem aren’t fun and filled with mischief of various sorts. Take a group of retired folks, who are already quirky, and place them in close proximity to one another and life is anything but dull. Ah, sweet New Jerusalem!
Enright has drawn characters who come alive and you begin to feel they live next door. I especially enjoyed Dominique and when engaged in conversation and meals with Starks, I enjoyed them as a pair of history loving bibliophiles.
A spark of perceived terrorism comes to New Jerusalem in the form of a group of people attempting to save their local waters from the efforts of big business and the government, but to tell you more would spoil it for you. And you are going to read it, aren’t you?

On a scale of 1-5 stars, New Jerusalem gets 4 stars. I don’t ordinarily share my star ratings here; I leave those for other venues, but this one I want to make sure you’re at least interested in.
The loss of one star was based on the author’s own rating of this book as an “R” rating for two explicit sex scenes, both rather matter-of-fact. However, there is no violence or bad language.