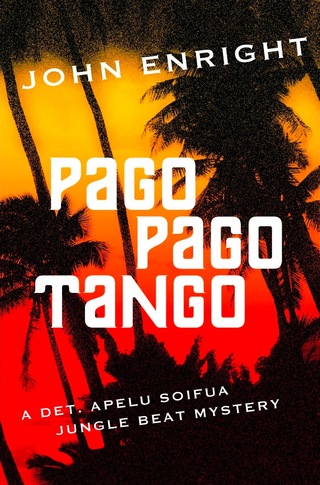 "Apelu sometimes thought of the interplay between the Samoan and palangi [whites] worlds he moved through as a dance -strange partners, mixed music, yes, but a dance nonetheless, with him trying not to step on anyone else's toes."

Through it all Enright meticulously interweaves the experience and landscapes of Samoa's mountains, rain forests and jungles that he knows so well; whites in gated communities on the Tafuna Plain where prejudices breed unhindered, the local club scene where handsome T.J. murders another guy in self-defense (or was it?), inter-village rivalries among testosterone-driven young men, lots of rain, the SeaKing Tuna processing plant, which isn't all it seems; extravagant funerals, churches and prisons, Soifua's wife, Sina, and their passel of kids, Spike Tusisami of the local DEA, beautiful lagoons, terrifying cliffs, fleets decorated for Christmas, village chiefs, and the daily grunt work of cops like Soifua, caught between two very different cultures.

I hope this is the beginning of a series. Apelu is laid-back but watchful, perceptive. Danger threatens such a false paradise. Enright plants his clues carefully and builds suspense as the noose tightens. All seem mysteriously connected, but how, exactly? Who murdered whom? Why?

And one of my favorite lines: "He remembered an old joke about the 'missionary position,' that the natives called it that because they had never before seen people do it in that boring way."